After being waitlisted twice we got a call this past Saturday morning from the local library to let us know we had made it in to Storytime. A spot had opened up in the “Tales for Twos” Tuesday at 10:15 a.m. session.

We were out of town this past weekend and yesterday was a Monday of all Mondays, so it wasn’t until 10 p.m. last night that it dawned on me that the first Storytime of this session falls on Halloween week.

When we lived in Centerville, kids would wear their Halloween costumes to Storytime.

I had no idea whether or not they did that in Hudson.

I sent an email to the library at 10 p.m. hoping someone might answer off hours. Unfortunately, for me, the library doesn’t follow the same rules as corporate America and the email went unanswered throughout the night and early morning.

I didn’t want the kids to miss out if they were the only ones not dressed up and I also didn’t want to be the only mom who brought her kids to Storytime in full costume.

I opted to embrace the Halloween spirit and dress them up. We wheeled up to the library parking lot and I immediately saw one mom carrying her two-year-old daughter into the library wearing normal clothes.

I went through the extreme work-out that is putting an independent 11-month-old into a chest carrier and having a two-year-old hold your hand while marching through a parking lot and juggling a diaper bag.

Was there a sign-in for Storytime here? Name tags? What room was it held in?

I talked to a children’s librarian to find out and I simultaneously scanned the room to costume check. It didn’t take long for me to notice that none of the other kids were dressed up.

There was one little girl who had a pumpkin cape on over normal clothes, but it was soon removed, whether by her or her mother, I didn’t see.

So, we funneled into the Storytime room with the twenty-or-so other kids and moms and grandparents and Garrett and Laine and I settled onto the carpet (meaning, all of our belongings got thrown into a giant pile beside us and I continuously pulled Laine back to our undesignated area while Garrett insisted on standing up).

There was singing and a book about pumpkins and shaky eggs and bubbles and Garrett and Laine had a lot of fun.

I was initially going to write despite being dressed up as Lightening McQueen and Batgirl, Garrett and Laine had a lot of fun.

But really, because they were dressed up as Lightening McQueen and Batgirl, I think they had even more fun.

To be honest, Laine is still too young to care, but Garrett loves his Lightening McQueen outfit and another little boy came up to him and thought it was the coolest and Garrett was so proud.

They are only little once and I know the magic that comes with being little and the holidays is limited. I see now that it shouldn’t have mattered to me if they were the only ones dressed up or not.

It doesn’t matter what other people think, what matters is if the kids are happy.

What matters is if the kids are having fun. 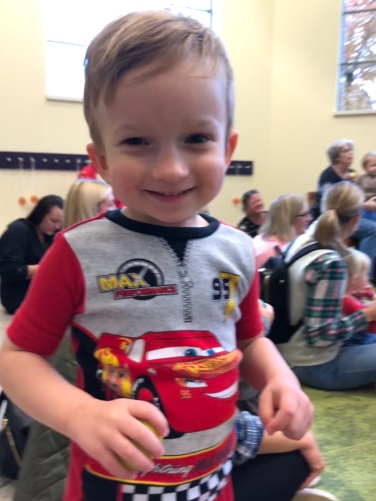 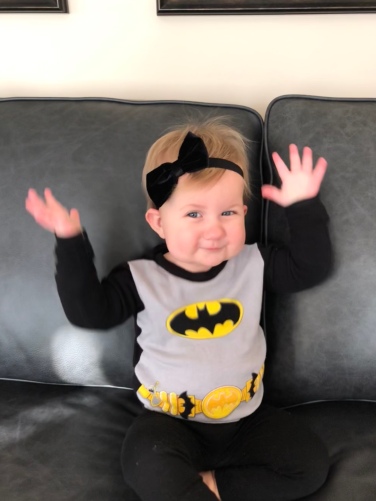